For their Senior Project, the Class of 2010 sponsored a Basketball Benefit. The event was held in the LHS Gymnasium and attended by an estimated 350 to 400 people. The project itself raised $2,252 to benefit the L-P School Foundation. The event also collected three very large boxes of items for the Helping Hand food pantry.

Four very entertaining and competitive basketball games were played. In the first game, the alumni team captained by Charlie Hansen topped Brian Hinkle’s alumni team in a 33-32 nail-biter. In the second game, the women’s staff, wearing yellow “Old School” shirts, defeated the LHS senior girls by a score of 41-29. The third game included almost as much wrestling as basketball, with the men’s staff facing off against the LHS wrestlers. While the men’s staff triumphed, the final score could not be determined, as the clock operator was bribed to pad the wrestler’s score. The final game featured the first game winners, Charlie Hansen’s alumni team, against the LHS senior boys. In a hard fought game, featuring slam dunks and three-point shooting, the alumni came out on top by a score of 36-31. Between the second and third games, the LHS Dance Team performed a routine. Before the second and final games, spectators had the opportunity to showcase their own 3-point shooting skills by paying $1 to attempt a 3-point shot, and collecting $2 if the shot was made.

The final event of the evening was the Half Court Shot competition. Over the course of the evening, five tickets were drawn, and those five people each had one opportunity to shoot from half court. Those making their shot would share a Grand Prize of $1,000. Unfortunately, none of the shooters were successful. The five shooters were Taylor Harris, Mason Johnson, Cory Fritz, Becky Orchard, and Ty Trumpower. 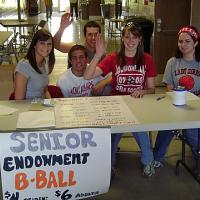 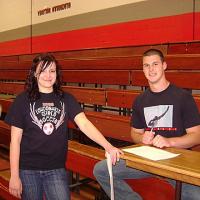 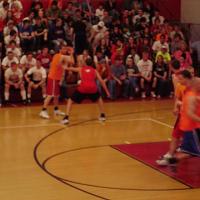 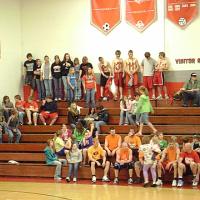 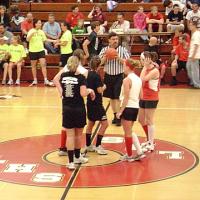